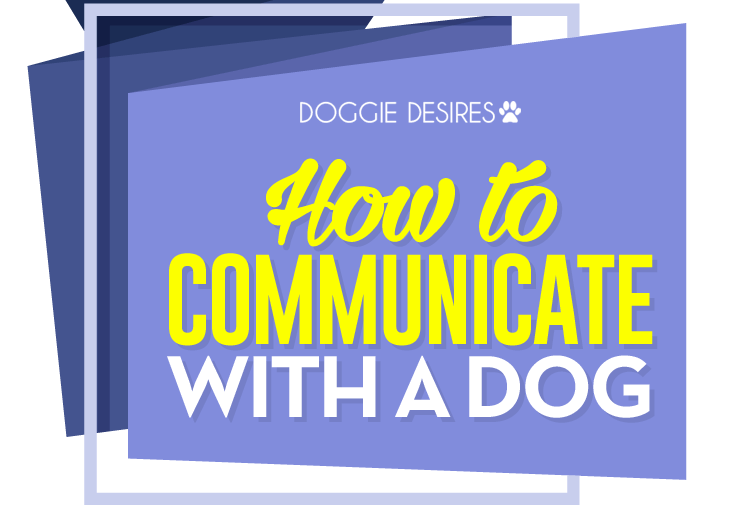 Most of behavioral problems or blunders your dog will do are a direct result of lack of poor communication between you and your dog. Have you have ever wondered if your dog is trying to send you a message?  Dogs, more so than any other pet, have the capacity to let us know what they want. How many times have you figured out your dog wants to go outside or maybe wanted to play or even was hungry and wanted food? You may figure it out some of the times, but the rest of the time you’re probably clueless. So, here’s how to communicate with a dog so you actually know what’s going on.

The best way for dog owners to communicate with their pets is by knowing how to act when they are trying to execute a command. Dogs could not possibly speak to their owners through words and the only way for them to relay their feelings to their masters is by barking and doing different kinds of movements. Read along to get to know how to communicate with a dog

Paying key importance in studying how dogs behave can make us learn how to communicate efficiently in a manner the dog will instinctively understand. Dogs majorly communicate through the following:

Body language is the most used form of communication a dog uses while trying to communicate with its owner. Just as we humans constantly use to tell how another person is feeling just by the way they are holding themselves. This is the same for dogs. To start learning how to communicate with a dog is to start watching the dog and observing its body behavior while doing something.

You will learn incredibly a lot of things about your dog. You will learn how to tell when your dog is thinking about getting up. One also gets to know what body language the dog will use to communicate mild social stress. Observing your dog will pass a lot of information to help formulate a kind of communication between you and your dog.

Once you will be able to understand your dog’s body language, you will start seeing changes in your dog and you will probably like it more since there is a mutual understand established.

Another major part of which your dog will converse to you is through vocalization. This is the only one factor your canine’s language stock, when they bark they are trying to say maybe “hey” differently.

What we say to our dogs is important. How we say it is even more crucial. Dogs will comprehend the different tone variations to distinguish commands, correction and applause. Commands as we know are given a firm and strong tone. Corrections are slower sharp and growlier. Applause can be more exciting and more exuberant.

According to http://www.doglistener.co.uk dogs are always trying to converse with us but without understanding the meaning of the language we will often miss what our dogs are trying to pass. All the commands should be precede with the dog’s name. Otherwise, how will your dog know that you are talking to him?

Another important aspect in training your dog to effectively communicate with you is training him on looking at you. As soon as you have made your dog look at you, talk to him and encourage him to keep the eye contact for a while. When he looks up, praise him and give him food. After that it will be easy since you got his attention.

Your canine friend does not too much talk. Dogs don’t talk too much or converse with each other for a long period. According to www.petfinder.com when teaching a command for the first time, it always advisable to help the dog be successful by luring him into certain positions.

Dogs are known to best learn by associating words with actions. They are not born with an ability to understand words as we humans. Always be consistent! Ask your dog to do a thing at a time. Also

Remember to be specific with your commands. Remember when communicating to use the tone inflection that is appropriate for the message you’re passing

Below is a vocabulary list that you could use to train you dog in communicating with him:

• WATCH ME/ LOOK AT ME! This is to get your dog focus on you and make eye contact

• GOOD DOG/GOOD KID! To be used after picking the right choice. To be said in a low yet firm tone.

• SIT! The most common command. This is when you want to get active control of your dog.

• STAND! Used when you want the dog to go from the couch or floor and stand with its four feet.

• STAY! This is to suggest that the dog should not move from the position he is.

• OKAY! This is to release the dog from the initial position it was. He is done working until when commanded again.

• DROP IT! /GIVE! This is to command the dog to spit whatever he has swallowed in his mouth. Train this command so as not to create an overly possessive dog.

• OFF! A command to jump on either people or furniture.

• LEAVE IT! This is to command the dog not to pick up an object. This command comes in handy while taking a walk in the street with your dog.